Proto-Nordic *saiþaR means “tradition” or “sorcery”, but upon entering the Viking Age this term had branched into Norse seiðr (“sorcery”) and siðr (“tradition”). Originally though, both sorcery and tradition was the same. Perhaps is this branching evidence of the decreasing ability of farmers (as opposed to the intellectually superior hunter-gatherers) to pass the tests, so one part of the Tradition became esoteric whilst the other one remained exoteric. One became “sorcery” and the other one remained the everyday beliefs and festivals and traditions, sans any deeper understanding.

The English term sorcery as well as proto-Nordic *saiþaR are believed to derive from the same PIE root *sêr-, meaning originally “lot”, “fate” or “give sign”, or even just “signs”. 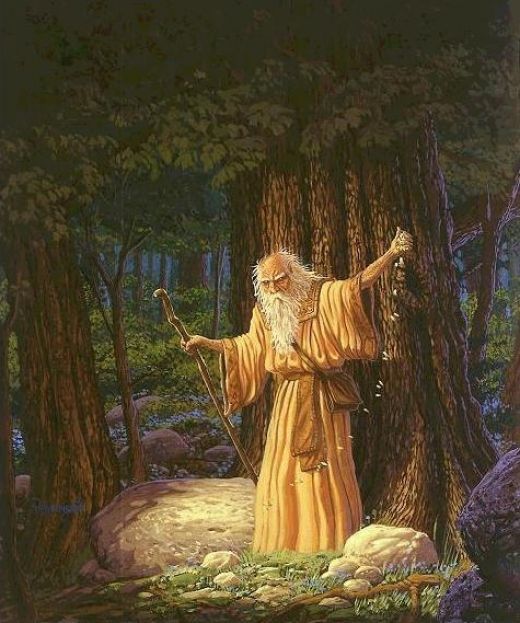 The sorcerer would carry a sacred bough, a sorcerer’s staff, called a gandr, from proto-Nordic *ga-anda-, meaning “animate” or actually “give breath to”. He himself was the forebears reincarnated, a god, Óðinn, and like the placenta (the world tree) transfers knowledge from the forebears to the foetus via the umbilical cord, he would sit under a sacred tree and transfer knowledge to others from the sacred tree and himself via his sorcerer’s staff. He would help them “give birth to themselves”, like a midwife of the mind, to reincarnate, by “giving them signs”. This was his sorcery.

The signs could be songs, runes or stanzas, but he also used physical objects for this purpose. These objects were either “false” items or items linked to the individual that was to reincarnate. The latter would be collected from the grave of the person who was going to reincarnate. This was the purpose of burying the dead with their most precious items: so that they could recognize and remember themselves in the next life. The “false” items were present just to allow the sorcerer to test the person. If a person was to reincarnate he would recognize the items he had known in his previous life, and would then not pick a similar “false” item as his own when he was to recognize himself. Only the real person would be able to tell the difference between e. g. two different swords, one “false” and one he actually owned in his previous life.

If a person “recognized himself” in this manner, the sorcerer would help him remember himself, by means of this sorcery. He would re-animate the dead, so to speak, in a new body. He would discover his lot in life, his fate, by means of sorcery.

Random OSR for the people

simplicity, and an authentically European lifestyle

A collection of articles, artwork in search of inspiration

All posts by Varg Vikernes

I think therefore I think

To all forsaken by the north

Gravity is the air of all; but diversified in all

About Forests, Mountains and Rivers

The Call of Thule

THE WAYS OF YORE

To restore an instinctive and creative learning

The site of the priest of the sacred words

Often happens the smith must blow.

Thoughts for a European Resistance